There it is, on the guy with the white sunscreen nose and free trucker hat, right under his pudgy dad belly and tightly-tucked t-shirt that reads “I MickeyEars Florida.” This tourist’s dreadfully tacky fanny pack is armed with money-saving snacks, ready to embarrass his cool tweens all over their Instagram stories.

This is the poor fanny pack’s reputation, a painfully-awkward old person who scrunches their face and takes pictures of bad theme park food – but that’s doing the fabulous fanny pack a serious disservice. Before they were shunned by socialites, they were a ’90s raver’s best friend. Today, they’re enjoying a retro-fashion come back, with high-end designers Coach and Gucci releasing their own take on the trend, but when the dust settles on Coachella’s flower crowns, dancers in the Sahara Tent better remember it’s more than just a passing trend. Fanny packs are a lifestyle.

Carrying your essentials in the comfort of hands-free style was an early pinnacle of human ingenuity. Anthropologists have traced the fanny pack all the way back to Stone Age Ireland, where travelers kept precious rock tools close to their person and safe from bandits. So-called “buffalo pouches” were popular among Native Americans. Even Ötzi, the naturally-preserved mummy who lived between 3400 and 3100 BCE, was discovered by German tourists wearing his own prehistoric belt pack. 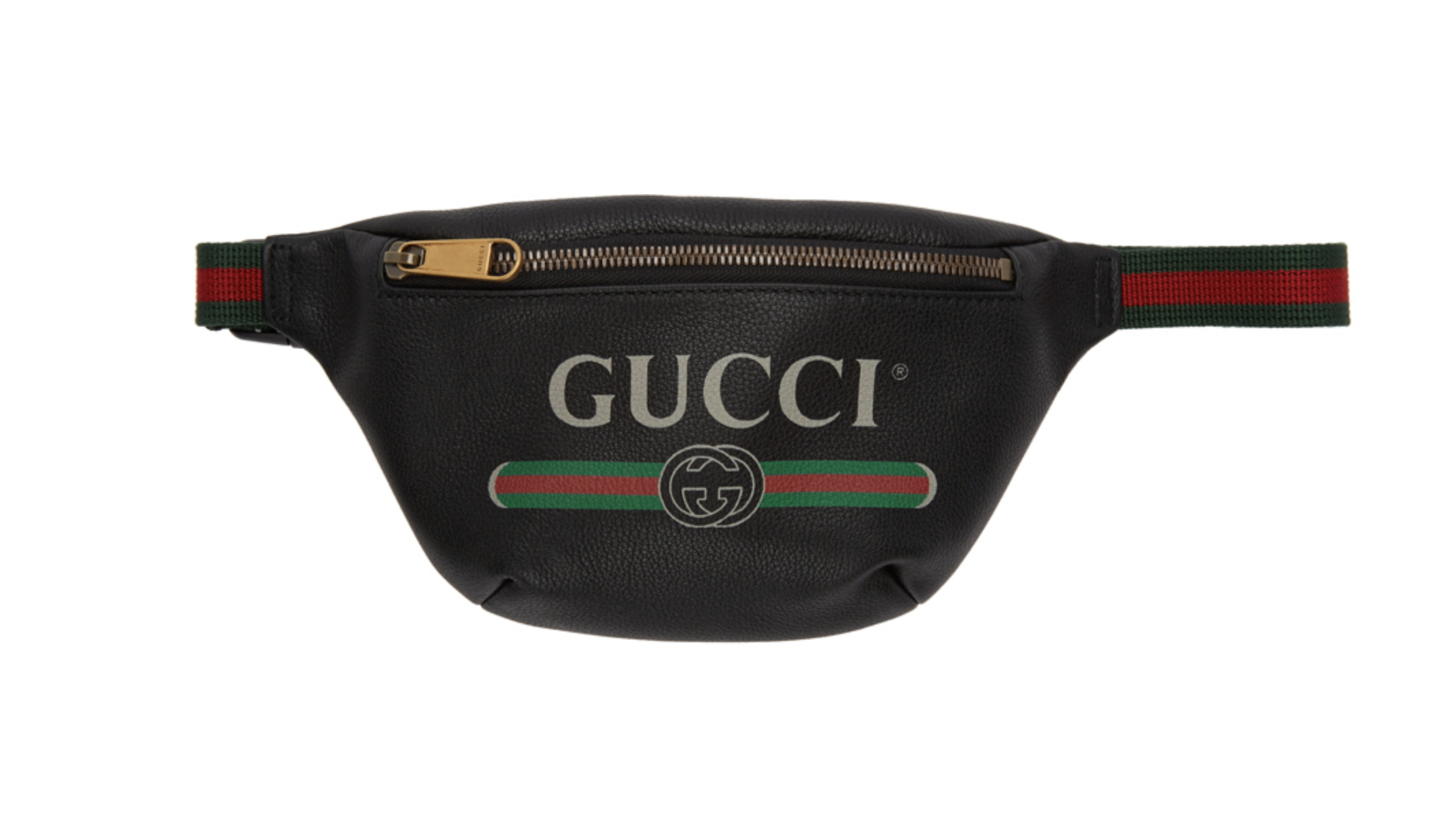 Of course, the fanny packs we’ve come to love (or love to hate) rose to prominence in the 1990s. Uri Morales is a 40-year-old veteran raver who travels the country from festival to festival with his matching glitter-bearded partner. When he was 16, he got his start in the underground party scene of Arizona, frequenting desert parties discoverable only by calling strange telephone numbers and following cryptic instructions to turn at specific mile markers. He watched first-hand the rise and fall of the fanny pack from fashion must-have to detestable faux-pas.

“It was [so] important back then to have a fanny pack or to have some sort of pack with you,” Morales says. “They were very much a big thing until – like many things – old people started dominating them and adapting them to their needs. It was like, ‘ew.’ After that realization that they’re hideous, I said ‘never again.’”

“Never again” ended abruptly with a trip to Burning Man in 2015. The dusty storms and warm temperatures made fanny packs a must-have. While he didn’t so much love the rough terrain, he did fall in love with the festival lifestyle, and now, he and his partner have the game down to a science.

“I’ve definitely gained some wisdom as to what’s in my fanny pack,” he says. “Back then, it was a water bottle and something silly like trash. It was those huge fanny packs that got really massive. Now, I’m a lot kinder to myself, so I carry vitamin C, earplugs, a face mask. I carry my I.D., cash, a lighter. I carry Neosporin and a bandaid, because I’m clumsy.” 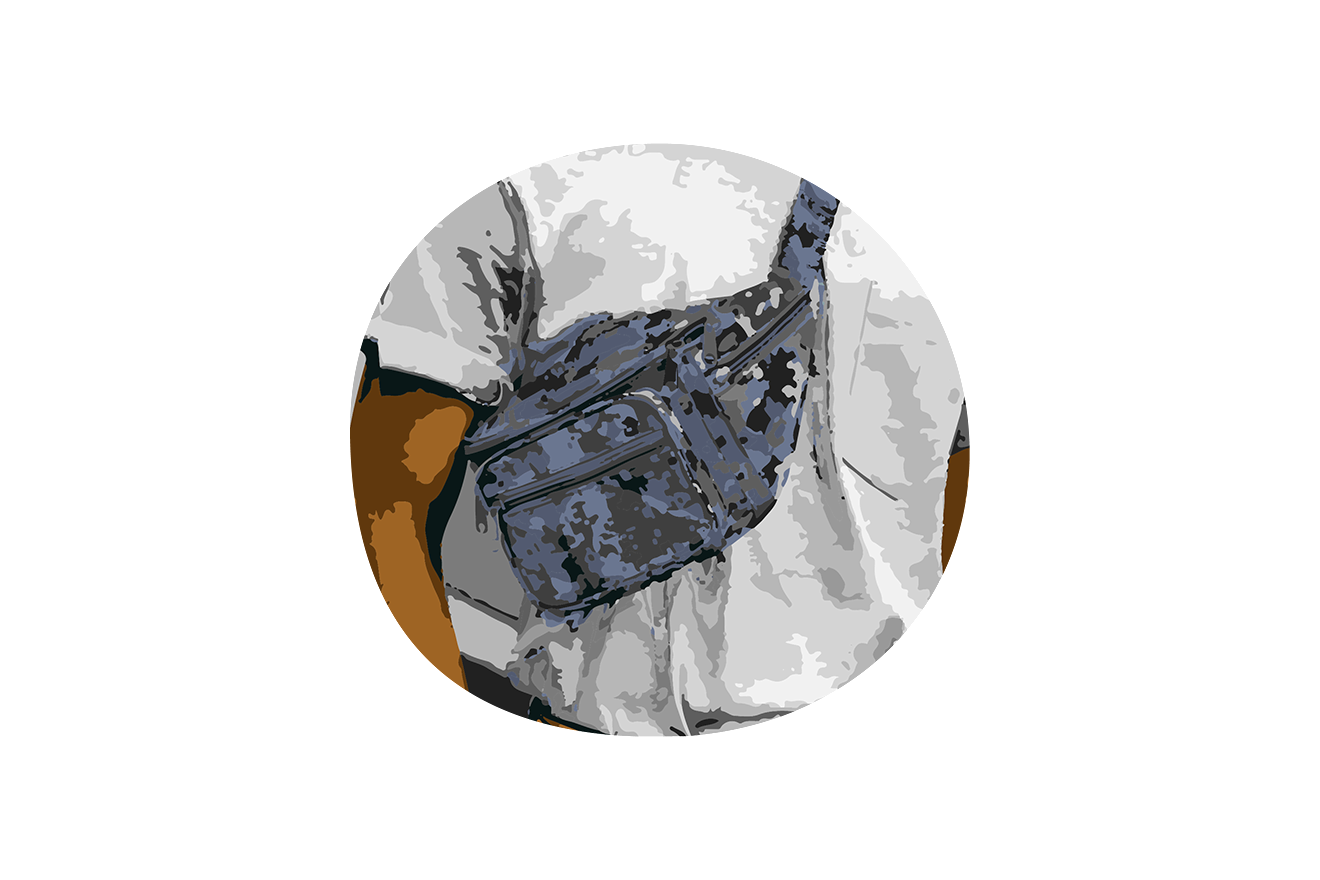 Morales and his partner even carry little keepsakes and messages to hand out to younger partiers, adorned with little pearls of wisdom and encouragement.

“I’ve met so many people this last year just passing out those pendants,” he says. “If I meet somebody that I engage with and I connect with … it’s special to me to share and to give. I walk away not just sharing wisdom, but also having something to connect it with visually.”

For videographer Emily Swank, a fanny pack is more than just handy – it’s necessary. As one of Dirtybird Records‘ (who incidentally sell their own fanny packs) main documentarians, she runs from the stage to the crowd to capture scenes of Claude VonStroke, Justin Martin and the crew as they make booties clap across the country. There’s not always time to run to the booth for an extra battery or SD card, and years spent hauling a massive backpack can do serious spinal damage. She’s been rockin’ fanny packs since the ’90s, too, and she believes in them so much, she named her company Fannypack Films.

“For me, what it means is simplifying everything, and that’s my company,” she says. “I’m a one-girl band. I’m basically all your film-making essentials in one place. You can go to a really big production company, and you can be luggage, but I am one and done, whatever you need, let’s get it made, and let’s do it with flair – and that’s what a fanny pack is.” 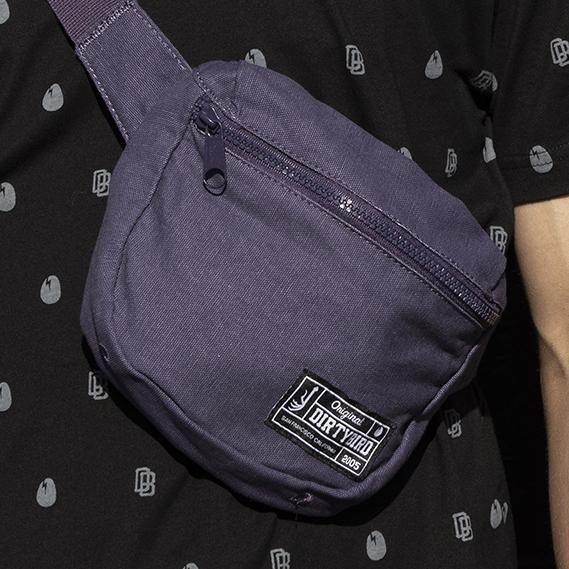 She also loves that it’s kitschy and tongue-in-cheek, a vibe that fits the party-centric content she creates. She also works in stop-animation and documentaries, and if there was one drawback, it’s just that the term “fanny pack” can be considered vulgar in England or Australia.

“They call [fanny packs] a bum bag, because [fanny] i’s a slang word for labia,” she laughs, “but I thought ‘whatever, I’m a female filmmaker.’ If you want to call me ‘pussy pack’ and that’s the connotation, I’m fine with that, because I have a pussy, you know what I mean?”

Not that you need a “fanny” to be a life-long fan. Brian Greenfield is a 32-year-old burner and festival lover in Chicago, and he might be the biggest fanny pack fanatic on the internet. He actually started the official fanny pack Facebook page back in 2009, as soon as he discovered no one else had.

“Music and dance was a big part of the start to my personal relationship with fanny packs, because when I was in drumcore in Color Guard, we all had to wear [them],” he says. “I thought it was cheesy at the time, because it literally was a required thing, so I wore it all summer at all my rehearsal. [By the end] I was like, ‘I am never taking this off.’”

When that summer ended, he brought the fanny pack with him to the University of Florida, and it was there that he “introduced dance party culture to the fanny pack.”

“It used to be really hard to find cute fanny packs,” he remembers. “I actually got a lot at head shops because head shops, and every now and then, on kitschy websites. Now, you can’t go to any festival without having 20 shoved in your face. Someone hit me up from college out of the blue, literally hadn’t talked in years, and he’s like ‘Brian, you’re such a trend setter.’ I was like ‘what?’ and he says ‘the fanny pack, man, they’re everywhere.’ I was like ‘oh, I guess they are.’”

Tagged under: A 90'S RAVE CLASSIC, AN ODE TO THE FANNY PACK CYBERDOG AND KAPPA LINK UP FOR TYPICALLY FUTURISTIC COLLABORATION