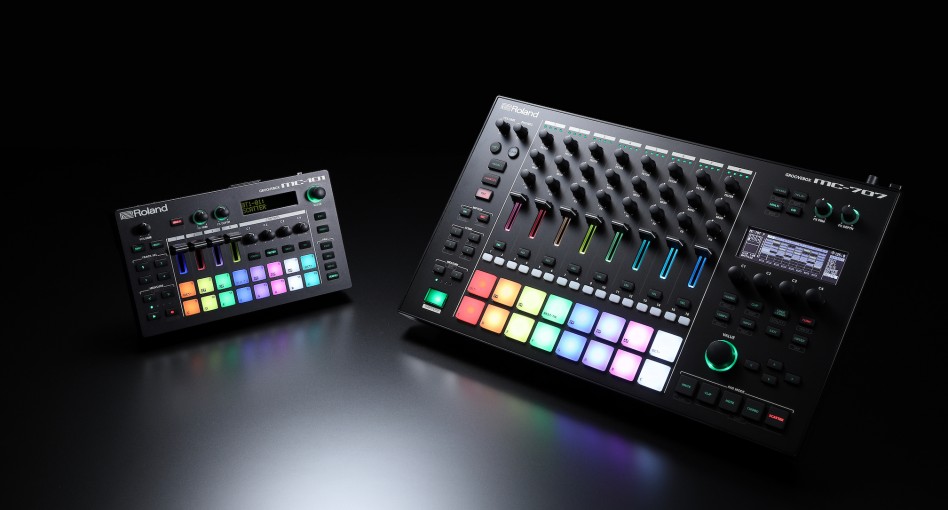 Unlike the TR-8 though, there’s lots of ‘production’ style features like direct sampling into the unit, as well as eight tracks of recordings, FX, built-in synths and a large library of synth sounds, samples, phrases and loops to build up your track. TR-REC from the TR-8S has also been included, letting users record their knob and parameter movements directly onto the sequencer. Using the pads, you can play in drums or chromatic notes, as well as preset chord patterns. There’s also MIDI I/O to sequence and sync external gear.

The USB port lets users record their eight tracks back into their DAW for arranging etc via a single cable, similar to the TR-8. The MC-707 comes in at $999. There’s a smaller, cheaper groovebox too – the MC-101 – that features four tracks and faders, and is battery powered and costs $499. It features the same sound engine, but you can’t record directly into the unit.

Roland have also announced the Juno-06A, a new Boutique synth, this time mimicking a combination of the Juno-60 and the 106. That means there’s a new arpeggiator and chord memory taken from the 60 while they’ve also ported across the HPF from the 106 and the envelope-triggered PWM from the 60.

Elsewhere Roland have also announced two new Jupiter synths in the form of the Jupiter-X and the Jupiter-Xm. The X is a full-sized synth that recreates classic analogues like the SH-101. Juno range and of course the Jupiter-8 as well as taking more traditional sounds from its RD-Piano. There’s five parts in total so you can layer or split the keys across more analogue synth sounds and acoustic instruments. The Xm is smaller version of the X, focussed more on synthesis, and features smaller keys – the X and Xm come in at $2,499 and $1,999 respectively.