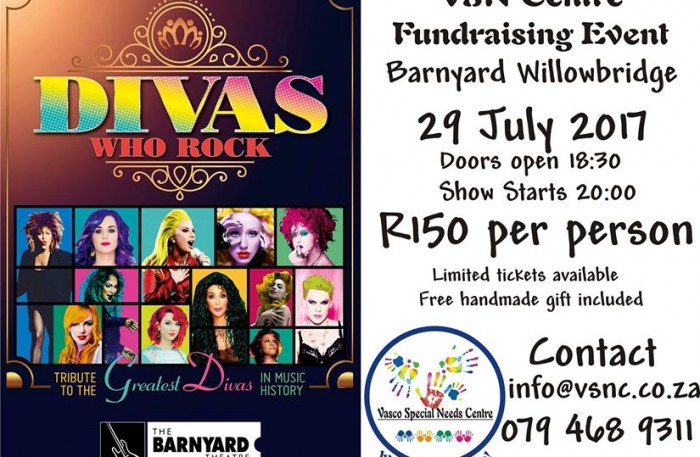 R150 per person. Tickets can be purchased from the Centre. Email info@vsnc.co.za or send us an inbox on Facebook. Here is some more details: “A diva is a celebrated female singer and a woman of outstanding talent.

The show features six decades of music starting in the 1960s with tributes to Carole King, Janis Joplin and Aretha Franklin. The seventies and eighties are saluted with mind-blowing tributes to Cyndi Lauper, Madonna, Cher, Whitney Houston and Tina Turner.

In the second half we experience the funky nineties with tributes to divas such as Alanis Morissette, Avril Lavigne, Kelly Clarkson, Britney Spears and Jennifer Lopez. Divas Who Rock features a broad selection of music for all tastes – from Brenda Fassie to Sarah Brightman – whilst current day pop stars are saluted with rocking tributes to Lady Gaga, Pink, Katy Perry and Jessie J. Divas Who Rock is about power, versatility & the music that has inspired generations and surpassed all boundaries. These amazing divas will make your hair stand up, get you rocking in no time, and leave you screaming for more!”